Sorry for the delays here with Part 2 and the rest of the blogs – just started a new job, so things are a little hectic.

I can heartily recommend the Granite/Blewette Roads to all of us on motorbikes. It’s a fun road, with lots of curves and elevation changes, and you can’t get going to fast on it, plus there’s very little traffic (at least on a Thursday afternoon).

There were a couple of spots where homeowners driveways had spilled some gravel out across the whole lane of the road, which led to at least one disconcerting moment as the rear tire slid out to the outside of the lean a bit. Yikes! But all was good, no spills and we continued on carving the twistie road until it popped us back onto the main highway to Nelson.

As we entered the highway we noticed a few cars parked along the opposite side of the road. We were each wondering what was going on until we saw an obviously dead deer dragged up to the cement barrier at the road’s shoulder, and a large red splotch in the middle of the lane. So it was clear that one of the cars further up the road had hit the deer and that a few cars had stopped to help. It was a bit sobering, considering Rod and I had a deer get up on the highway between us the day before. It’s one thing to hit a deer in a car, but it’s pretty scary hitting one with a motorcycle. That would for sure wreck your whole day. It was also sad to think of the deer, it really had a bad day.

Once we were back at the hotel, I zipped back out to the gas station to fill up, that way I wouldn’t have to do it in the morning. While I was parking next to Guy, I noticed that he had just washed his bike, for I think, the third time. Earlier he had threatened to not let me park my bike next to his because mine was so dirty. So he guilted me into washing mine.

It wasn’t a really thorough wash, I just got most of the grime off, it sure looked better. Then Rod rode by and stopped to stare in amazement. He called out that he sorta thought my bike was grey and since I’d washed it realized that it was actually black. I guess it was pretty dirty. Trouble was, it rained later, then overnight and for much of the next day on the trip home, so it’s all dirty again. 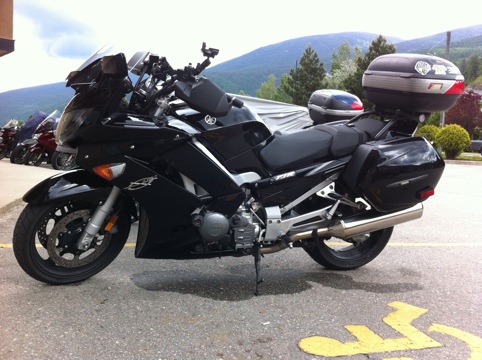 I might have mentioned in a previous post that I purchased a pair of kevlar summer gloves from Motoport. Today was the first day that I wore them on the bike and they actually worked great. My other gloves were a cheap pair of leather gloves that in less than a full season of use, were already beginning to fall apart. But, the old ones were one of the only pairs that I had where the thumb was long enough to not press on the end of my thumb, so to me, they were worth much more than the $50 I paid for them.

The new ones have a long thumb which is great, they are made of stretch Kevlar which is also great, but they have zero waterproof capability. And it rained a lot today, heavily at times. If not for the hand-guards I have installed on the handlebars, the Motoport gloves would’ve been soaked in seconds and my hands getting cold in the rain. Another fellow that we rode with on Tuesday bought the same gloves in a larger size and have very cold cold hands at the end of today, because he doesn’t have hand-guards on his ST1300.

Anyway, between finishing washing the bike and the start of the banquet, I slipped into the little cafe at the entrance to the hotel and satisfied my craving for a latte. Not quite the same as a Starbucks latte, but good enough! Then I enjoyed another relaxing neck/shoulder massage for 20 minutes. Very nice after 6 or 7 hours of riding.

There was still time to kill before the banquet, so a few of us hung out in Rod’s room for a couple of pre-dinner beers. While we were, there an wicked little thunder cell rolled in from the south and headed north up the lake. This picture is looking north towards the Nelson bridge in the distance.

This view of the rain pelting down onto the lake, is pretty much the same view as what I had from my although this picture was taken from the ground floor, and my room was on the second floor.

The banquet started at about 7pm, and after a little pre-dinner entertainment by our MC, Al DeVries, tables were sent to the buffet. The food was very tasty although the kitchen staff was hard-pressed to keep up with the consumption of food. All in all, the entire hotel staff did a pretty good job of dealing with us all for the week. 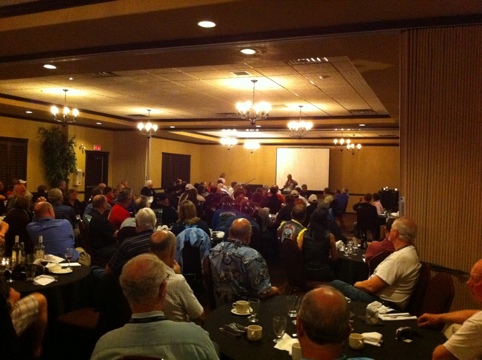 With dinner consumed, the time had come for the various draws to been and prizes handed out. Wile it was hardly fair to all the Honda ST owners, I won arguably the best prize of all – a free set of motorcycle tires! YAY me! Winning the tires means that I almost broke even on the hotel room cost!

So many many heartfelt thanks to Tim and Diana Graham, and the rest of the WeSTOC XVI disorganization committee – they did an absolutely fabulous job in putting WeSTOC together.

It was great meeting some new friends in addition to Guy – Rod, Ken, Bob, Al, Rod2 & Lorraine, Walt, Dwayne, Martin, Tony, Jeff and his wife and many others. I’m hoping to hook up with some of these folks later for some around southern Alberta.

Next update will be the ride home.