Louise and I left this morning on our first trip in a long long time. This time we’re going to head up to Whitehorse, Yukon, via the Alaska highway from Dawson Creek north, then back down the Cassiar Highway on the west side of BC through Stewart/Hyder and back home.

The first days plan was to get to Hinton, via Highway 22 north and then 16 west. We had planned on getting away by 10am but we finally pulled away by about 1115am – par for the course though! First stop was the Shell station just north of Cochrane to top up the tanks.

Next stop was a bio break at Sundre … 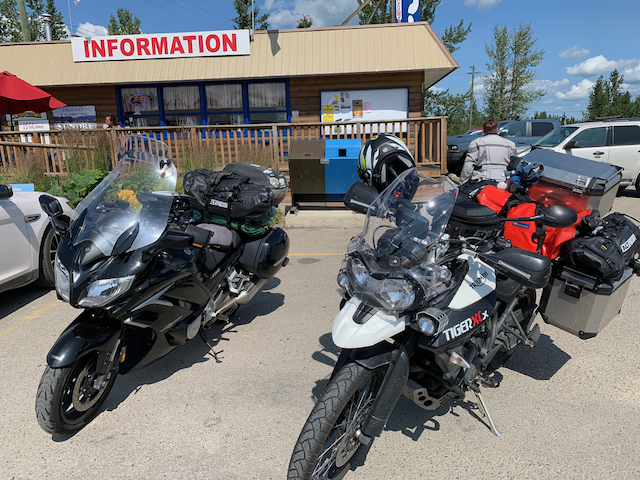 We stopped next in Drayton Valley for gas and a bit of a food at Timmies. Louise had soup, while I had a brekkie muffin, butter tart and cookie washed down with a smoothie and a coffee! 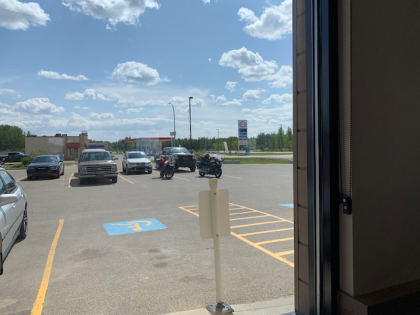 Highway 22 north of Drayton Valley pretty much all the way to the junction at Highway 16 was under construction, with a kilometre or so of no highway – just dirt/gravel. Louise road the same stretch a month or so ago and it was raining then making that section a bit sketchy at that time. It was dry this time so going through on the FJR wasn’t too bad.

For a few hours the GPS on both bikes said we’d arrive at the motel in Hinton at 5:56pm and I’ll be darned if we arrived in the parking lot at 5:56pm!

We got checked in by Jong at the office, who was a really nice guy and headed up to the room. For bikes trips, I would much rather stay at motels than hotels, for the simple reason that usually you can park right in front of the door! That makes unloading and loading so much easier.

After getting the bikes unpacked and changed, we walked down the road to Mr. Mike’s for dinner.