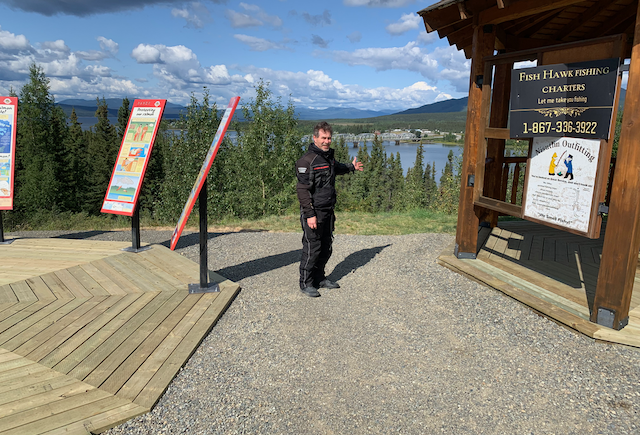 We awoke in the morning to a light drizzle outside and the prospect of more rain over the course of the morning. Today’s destination would be the titular Whitehorse, but we would have to stop in Teslin for gas, and as it turned out, breakfast too.

After getting the bikes all packed up in light rain, we headed out for breakfast. Our host,Mike, had mentioned that Archie’s, where we had dinner the night before, was a good breakfast place, and we saw breakfast items on the menu. However when we rolled up to Archie’s, it was closed until 11am – it was 830am or so and there was no way we were going to wait. 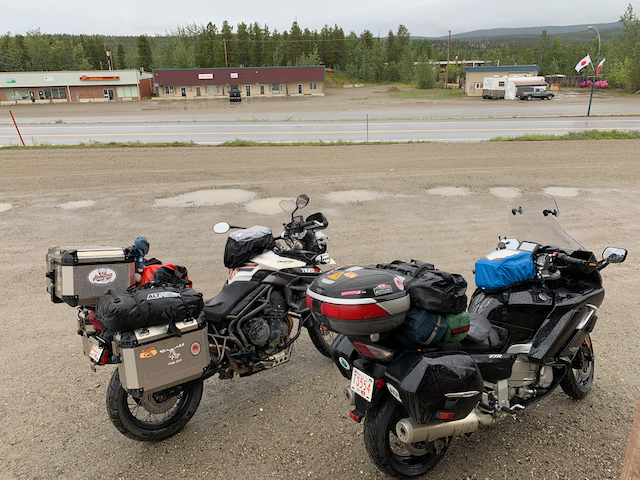 So we proceeded down the highway to the gas station at the edge of Watson Lake, fueled up and headed out in the rain.

After rolling along for some time, Louise finally accepted “defeat” and asked to pull over to put on her heated jacket. We stopped at a rest stop where the rain had petered out to a light mist and we both pulled out our heated jackets to put them on. The temperature was hovering at about 6-7 deg at this point.

Now warmed up, we continued heading northwest through the low mountains, and the skies slowly cleared. By the time we reached Teslin, it was mostly sunny and had warmed up to 18 deg!

We stopped at a viewpoint just before the famous Nisutlin Bay Bridge, which is the longest bridge on the Alaska Highway, and features the metal grated surface, which is pretty sketchy on the bikes. 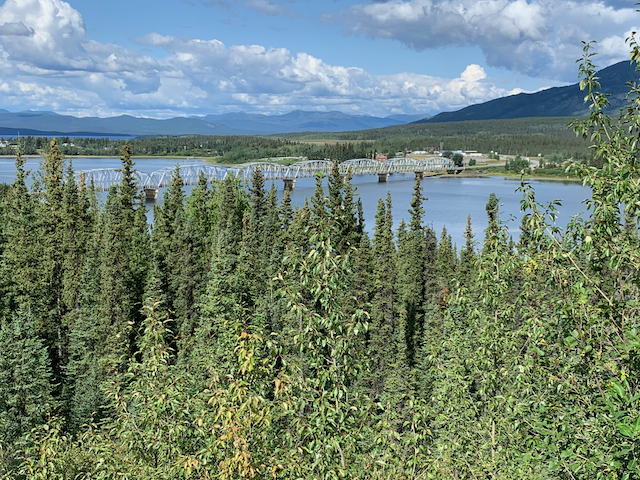 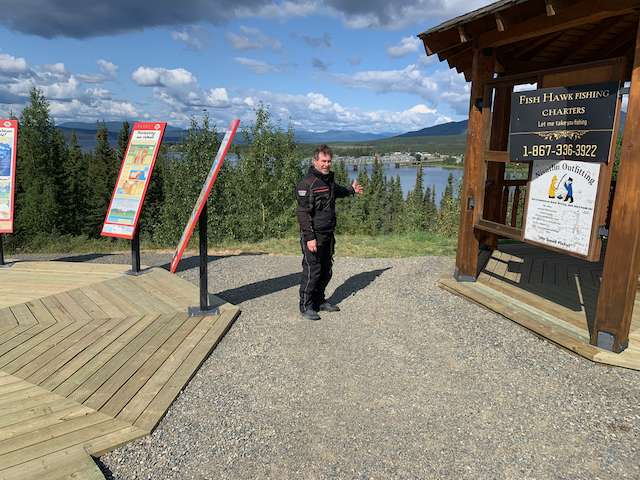 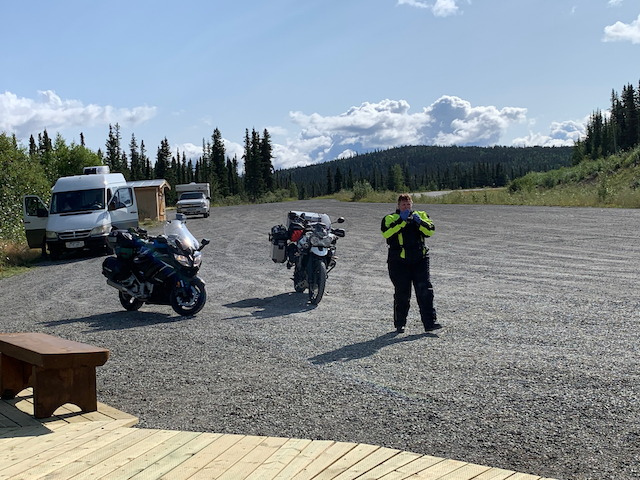 A few minutes later we were at the Yukon Motel in Teslin, where we topped up the gas tanks, then parked and had an unhurried lunch/breakfast. Lunch included a most excellent cinnamon bun … 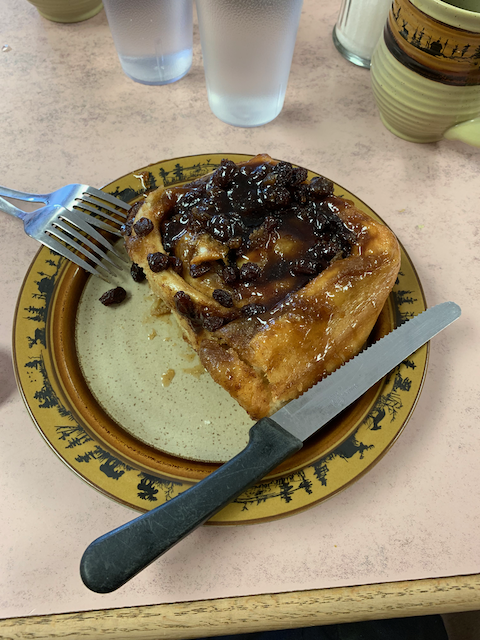 There was a fellow biker stopped here too, from Washington state. He’d come up from just outside of Watson Lake where he was camping in the rain, about an hour ahead of us. He’d come up the Cassiar Highway and was heading to Fairbanks on a BMW GS1200. He’d also had a couple of FJR1300s in the past, so we had a bit in common.

The Yukon Motel has a couple of tame critters on display … 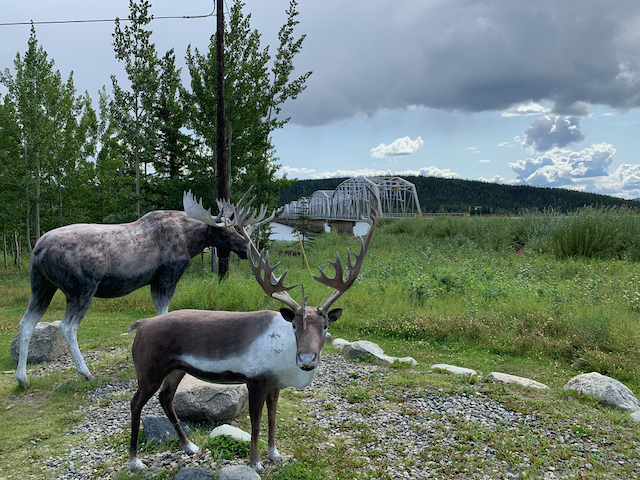 We arrived at Whitehorse about 330pm or so, found the hotel, got checked in, unpacked and got changed. My hair was bugging me in the helmet something fierce the last couple of day so I thought I’d get a haircut here to see if that would help. With the help of Google Maps, we found a place, but they were close to closing and wouldn’t take a walk-in. We found another place a short distance away and I was sat right down. Sadly it turned out to be one of the worst haircuts I’ve ever had – shaved on the sides, and left longer on top, Oh well, the difference between a bad haircut and good is about 2 weeks, so I’ll get it fixed up later.

A little while later we headed out for dinner. At breakfast in Fort Nelson a couple of days ago, we had been chatting with the guy at the next table, and among other things, he’d suggested that we should eat at the Klondike Ribs and Salmon restaurant in Whitehorse. It turns out that it’s only a couple of blocks from the hotel, so headed there. So did a lot of other people at there was a 45 minute wait! Eventually we were seated and while I had the ribs, Louise had fish & chips – both were excellent. Dinner was finished off with a nice tasty pecan pie. 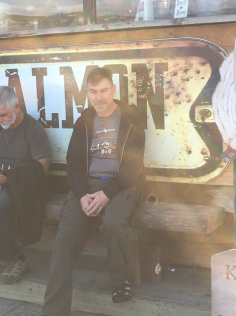 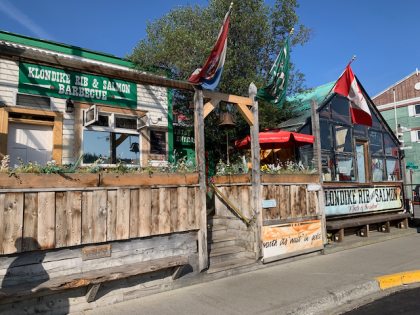 Back at the hotel, we moved the bikes to the underground parking at the hotel and spread the tent out to dry.

By this point we were pretty tired so we turned in for the night.