After pretty much 10 straight days on the road, things had both settled into a groove and at the same time, we were both getting pretty tired with the traffic on Highway 16 the day before. We were headed to a campground near Quesnel, BC, but as it turned out we didn’t camp that night – more in a bit.

We packed up the tent and it was really nice to have a bone dry tent to pack! The wooden shelter over the tent site kept the condensation to nothing. After a breakfast of instant oatmeal, we finished packing the bikes and headed out on the highway once more.

There was a long hill were heading up later in the morning and as we passed the 1/4 mark, I felt a stinging on my right shoulder. It was pretty hot so I had the jacket undone at the neck for some airflow – this turned out to be a mistake.

I scratched at the pain with my left arm, rather ineffectually given the bulky jacket and having to maintain control of the bike. Thinking it was just a sharp itch, I went back to concentrating on the ride. Then another stinging pain, and another! I threw my arm around to scratch and slap at my shoulder blade, realizing now that a bloody wasp had flown into my open jacket and he’d crawled around onto my right shoulder blade. All my scratching and slapping had done was piss the wasp off even more and he just kept biting me.

Realizing that I had to get to the side of the road and deal with this off the bike, I told Louise on the intercom that I had to stop, that a wasp was trying to eat me. I peeled off across the highway to the rest stop on the left side of highway. Stopping the bike, I quickly hopped off and starting peeling my jacket and layers off. I’m sure that the couple of carloads of people in the rest stop were wondering what the hell I was doing as flung off the jacket and kept taking layers off, including my t-shirt.

Louise came up to me as I was taking my t-shirt off and she looked at my back. Sure enough there were a number of swelling bite marks on my back. Louise put some anti-perspirant on my back to reduce the stinging, then I carefully checked my shirt and the jacket to make the damn wasp wasn’t there anymore before gearing up again and continuing on.

For lunch, we stopped at a pretty cool place in Vanderhof, BC. We went all the way into town looking for a place to eat that wasn’t part of a fast food chain. At the gas station we filled up at, the attendant didn’t have an opinion other that Subway. I recalled seeing a cafe at the western end of town at the town’s museum. We decided to head there and try the OK Cafe. 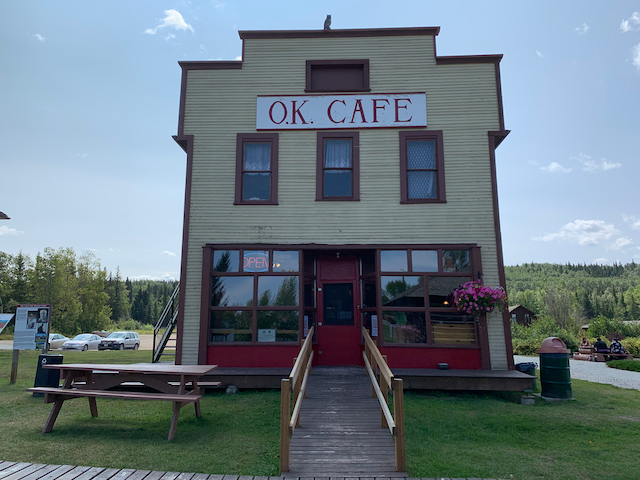 It turned out to be a great idea! The food was really good and the service was ok – way better than a fast food place, and the building had a really good ambiance and vibe. 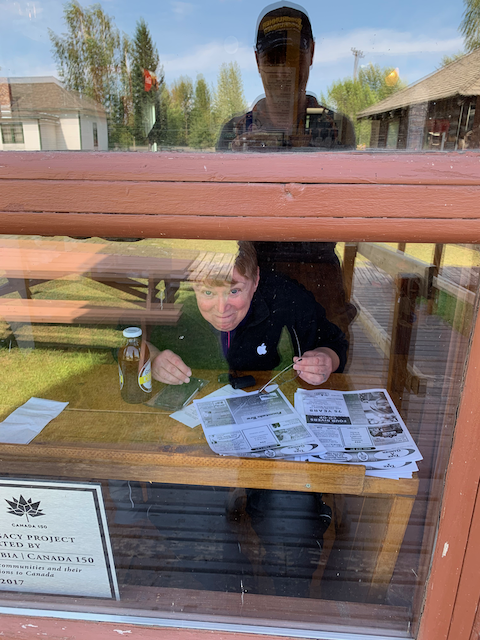 After lunch and bio break and a bit of a sit, we headed out onto Highway 16 again. A few hours on, we came to Price George, BC. Traffic was pretty heavy and we had to get through PG to get to Highway 97 to head south. It was again pretty hot and tiring but traffic was a bit lighter on 97 so that was good.

We had planned on camping near Quesnel but the place was farther outside of the town than it looked on the map. Plus we were tired, Louise even commenting over the intercom that she could tell I was tiring because I stopped nattering away to her. So at a gas stop we made the decision to not camp, instead we’d get a hotel for the night.

Here’s a hint – don’t try to book a hotel room online on an iPhone on the side of the road after riding a bike all day through heavy traffic in a strange town in the heat after days on the road. I didn’t realize exactly what day it was and when I booked the room at a local Holiday Inn, I made the reservation for the next night not tonight! Damn it! Realizing what I’d done as soon as I got the confirmation email, I ranted and raved at myself for a bit. What an idiot! I should have checked the dates to make sure I had the right day. After calming down a little bit, I called the hotel to try and explain what I’d done, but for some reason we couldn’t figure it out over the phone and so we decided to head to the hotel and try to figure it out in person.

If you’ve never driven through Quesnel, you should try it sometime. The highway goes through the centre of the town, but meanders back on itself before heading south again out of town. The Holiday Inn I booked was on the south side so we had to ride all the way through town. Then my intercom battery died so Louise and I couldn’t talk anymore. Louise now had to trust that I could figure out where were going without driving right past it.

This one hour was easily the most frustrating hour of the whole trip and really the only time that Louise and I barked at each other.

We did make it in the end, rolled in about 6ish. Got unpacked, showered and ate forgettable food at the Denny’s. Went to bed early – at least it was a warm comfy bed!