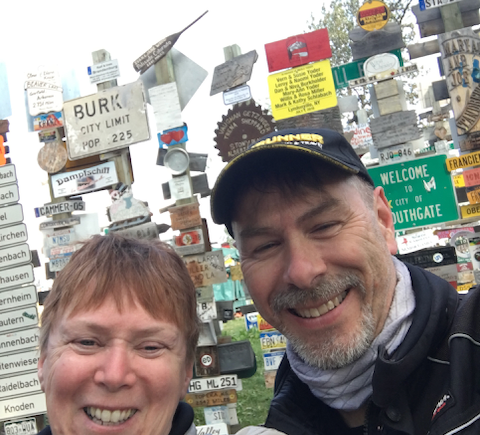 I’m typing this in early December and while it was a few months ago now that we completed the trip, thinking about the days on the road still evokes strong emotions.

We got back from the Whitehorse Adventure on Sat. Aug 17 and while it was a bit of a grind at times, riding a few hundred kilometres every day but two, the scenery in northern BC and in the Yukon was simply amazing and needs to be experienced in person – it can’t adequately be described.

We dodged some pretty inclement weather – while we had rain at times during most of the first half of the trip, we found out that just a few days after we’d left Watson Lake in the Yukon, there was a storm system that moved through dumping 40cms of snow in places – in mid-August! That would have added to the adventure!

The day after we got back, Sunday, our friends Dan, Kay, Trent, Bev and Shelagh asked us to join them for dinner on Sunday at a restaurant in downtown Calgary.  Among other topics, we talked about our trip since it was so fresh for us all.

Here’s the thing – as with all our other trips, we woke up the next morning thinking we had to get packed up and hit the road again. It was a bit disconcerting realizing that we didn’t have to get packed and ride a few hundred kilometres. Frankly it was a bit depressing to not be still riding. Sure it’s tiring and it was nice to sleep in our own bed and to see the dogs again. But there’s something about travel – especially on bikes – that feeds the soul.

So at dinner with our friends, the conversation naturally gravitated to future trips and it was resolved that we would all be doing a Pacific Northwest / Pacific Coast Highway trip in August 2020. Serious trip planning will commence after the Calgary Motorcycle Show in January.

I’ve also committed myself and Louise to a trip to Tuktoyuktuk in 2021! More on that later.