We had done a bit of packing the night before, and this morning was mostly about packing it all onboard the bikes. 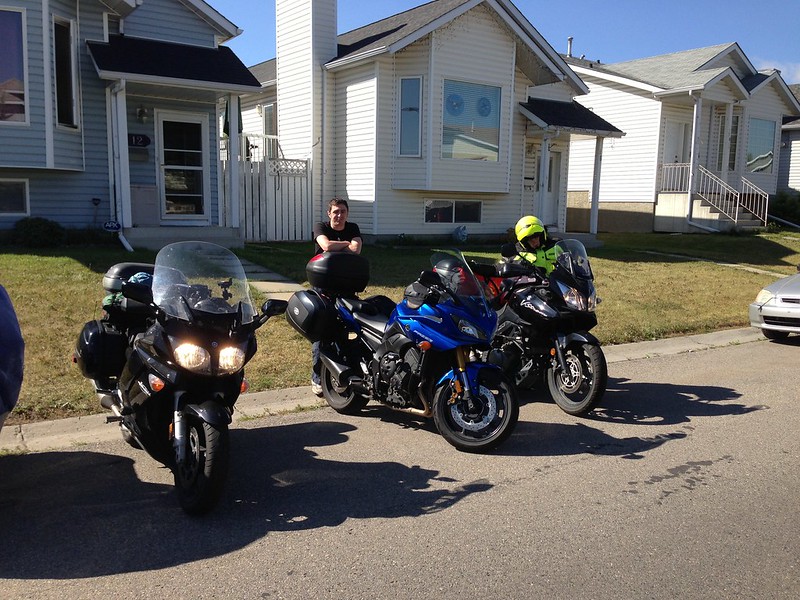 While we were loading up the bikes, Izzy got out of the house and was running around, so Louise decided to try her out in the tank bag … 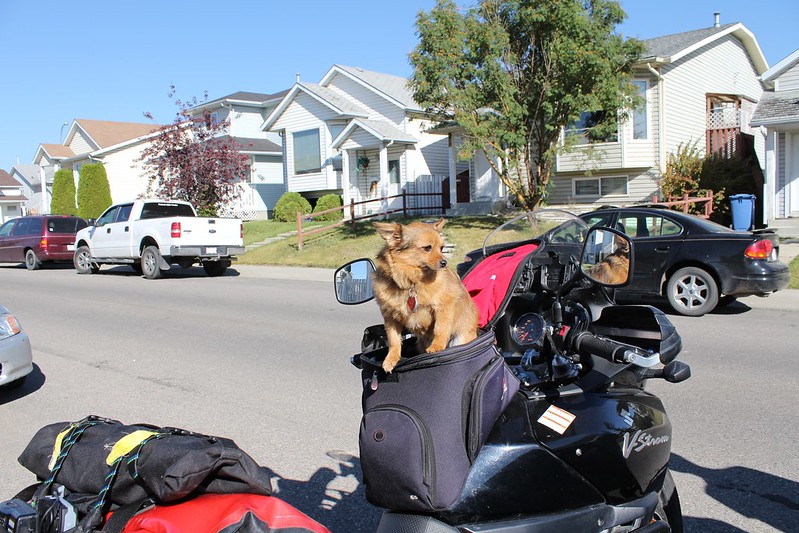 She kind of fits, maybe she’ll come with us on a trip sometime …

There was one thing we had to pick up before leaving. Louise wanted a sturdy camera bag for her new Canon 35mm camera. So instead of heading directly out, we ducked into the Future Shop at Deerfoot Meadows and got a nice camera bag that would fit into the tank bag.

By 1pm we were well out of town and heading south on the familiar pavement of the Cowboy Trail, aka Highway 22. 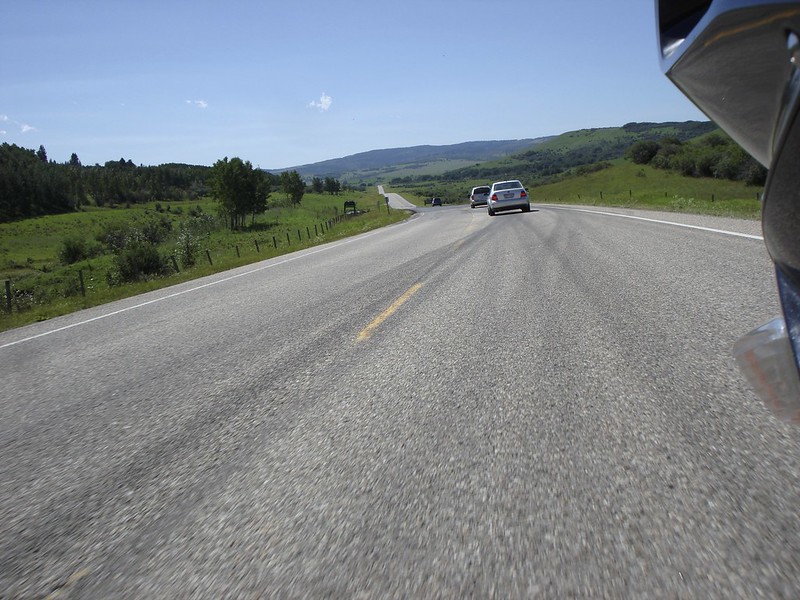 After stopping in Pincher Creek for a bit of gas and some food, the rest of the way south, through the border at Chief Mountain Crossing, was uneventful. We pulled into Johnson’s Campground just before 6pm, setup camp … 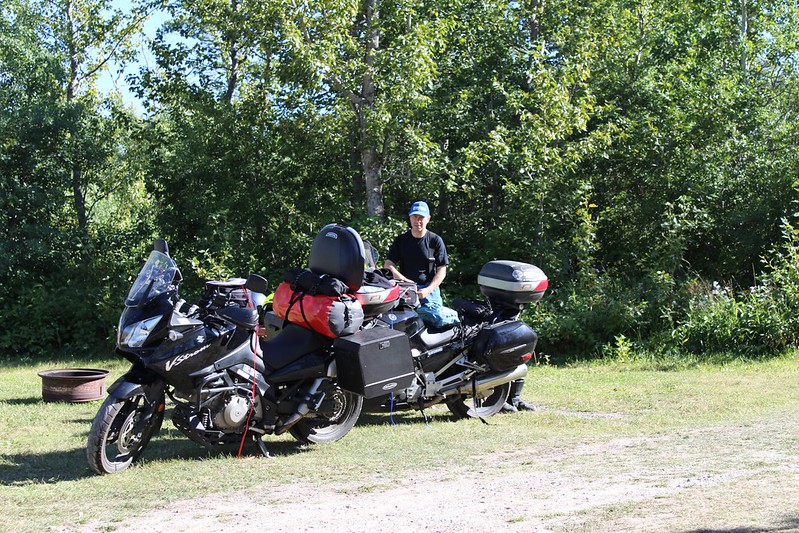 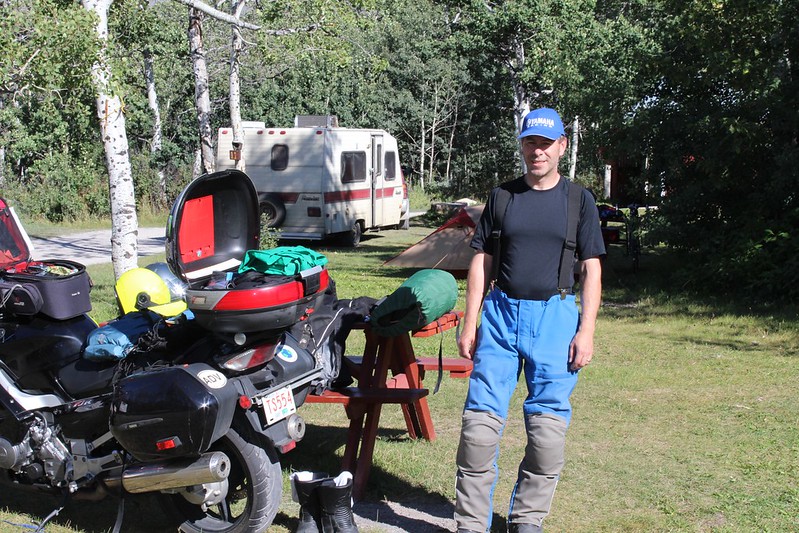 … then went to the Johnson Family Restaurant for dinner.

Back at the tent after dinner, we enjoyed a cup of tea and chatted with a guy who was fulfilling one of his bucket list items by riding his mountain bike coast to coast. His plan was to get up REALLY early in the morning so he could attack the Going-to-the-Sun road over Logan Pass. Apparently there’s a rule that bicycles have to be over the pass and on their way down before 10am or something like that. So he went to bed early, and because we were still recovering from the deck building effort, we went to bed early too.

Every year we try to have one big trip that we go on together, no matter what other trips we might have planned. It’s been that way since 2008 and our Montreal trip. This year was a little more complicated in that our patio deck was falling apart and it desperately needed to be replaced. It was now at the point where it wasn’t even safe for the dogs to go up and down anymore.

Now since I’d far rather go riding than … well pretty much anything … I had been prevaricating. So Louise, rightly so, got mad and said “No Deck? No Trip!” or something like that. We had agreed on Monday 19 Aug 2013 as the departure date. Based on the departure date, I worked out a plan for the deck and figured what bits and pieces would be needed to actually build the thing, then worked out how long I’d need.

With somewhat limited vacation time, I tried to minimize the time off of work for the deck building, but still wound up taking most of August 14, 15, and 16 off to build up the two of three major parts of the deck – the beam and the deck floor. By Friday, afternoon, we pulled down the old deck (which didn’t take much effort). By Saturday night we had the deck fully secured and the steps built. By Sunday night we had the steps up and the railings on. It was done!

But at what cost! There was absolutely no way possible for us to leave on Monday morning. We were just too worn out from working hard on the deck from early in the morning to dark, while also trying to do my job for a few hours on Wed, Thu and Fri mornings, in the 90 deg plus heat – Calgary was suffering a heat wave that week and weekend.

What made it worse, was that on Saturday, we’d made some reservations to go east to Duluth MN. for the Aerostich rally. Checkin for that was on Thursday, which meant that we’d have to leave Monday to get there in time, and even to just get there then, we’d have to haul ass to be able to arrive Thursday sometime before dark. Since we couldn’t leave Monday, that threw the whole Aerostich rally out the window.

Louise came up with a great alternative on Monday morning. We’d head south then west instead, staying no more than 2 days riding from Calgary, making the route up as we went. The only thing we knew for sure then, was that we’d leave Tuesday and head for the Johnstone Campground in St. Mary, on the east side of Glacier National Park in Montana. From there, we’d take it day by day.

By the way – the deck turned out awesome! And many thanks to Alvin, our next door neighbour and close friend for putting in hours helping out. And also many thanks to Robert for helping out and figuring out the magic with the stair railings.

I should have taken more pictures, but seriously, we just wanted to get the damn thing built.