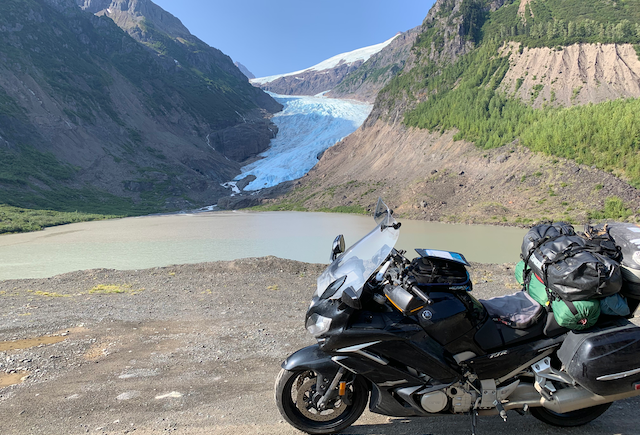 Today was Tuesday the 13th, which meant two things. One, we were now officially headed back home. Two, more places were open in town, including Ripley Creek Inn’s cafe, Toastworks.

After getting showered and packed up, we wandered over to Toastworks for breakfast. It was a busy busy place! 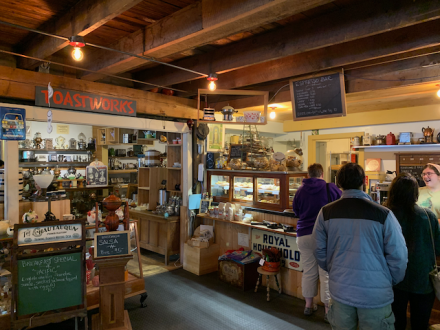 We fuelled up the bikes at the local Petro-Canada and hit the road. Since the day was way better weather than when we came into Stewart, we stopped by the side of the road at Bear Glacier for a few pictures. 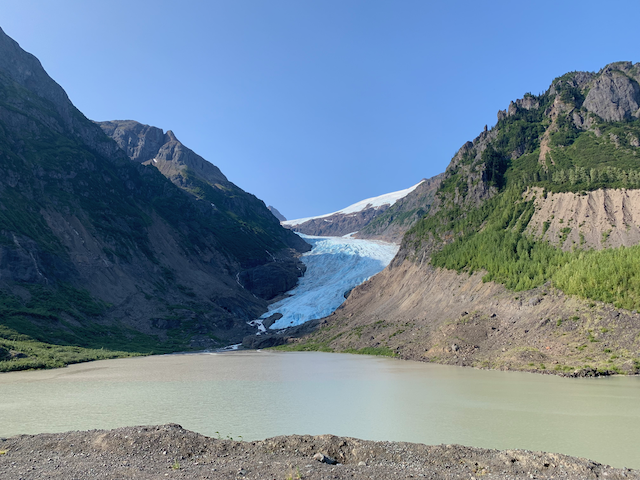 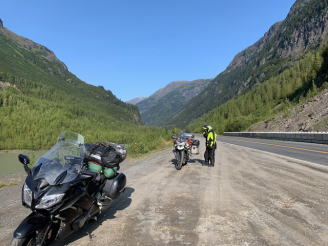 Highway 37A was just as scenic heading east as it was coming in the day before. Before long though we stopped at Meziadin Junction where 37A ends at the Cassiar Highway. After topping up the gas tanks and having a bio break, we headed south again on the Cassiar. 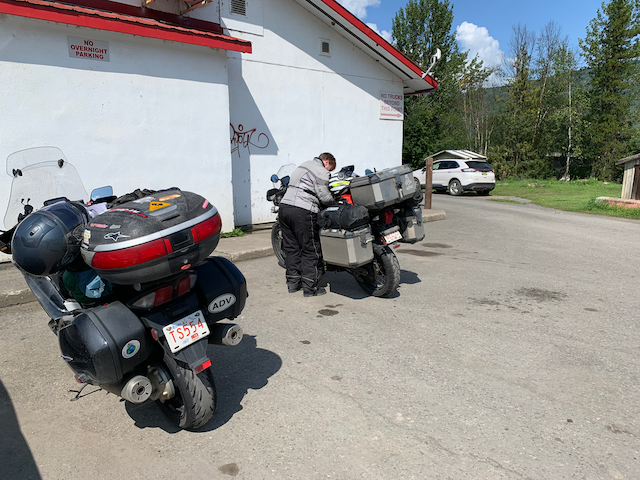 At the Nass River Bridge, we ran into our first major construction detour of the whole trip. No pictures, sadly, but the bridge was being replaced and there were about 10kms of the highway ripped up, with traffic crawling along a dirt road detour with plenty of bumps and ruts. It was pretty sketchy on the FJR and Louise left a big gap between us so she could see the lay of land. The good thing was that we rarely got above 20kph the entire way.  Back on pavement we made pretty good time to the junction of the Cassiar and Highway 16 just past the town of Kitwanga.

Once on Highway 16, a bit of depression set in. Highway 16 was busy with tons of RVs and transport trucks roaring by at 110kph. We were on the backside of the trip heading home. We were back into civilization and the adventure part of the trip was now over – from this point on it was just cruise the highway, try not to get smoked by a semi and make it to the next stop.

Midday came and since we were now a bit hungry we stopped in New Hazelton for a place where I thought we could get Sticky Buns – the Skeena Bakery.

Well we happened to stop there right at lunchtime and the place was busy with locals buying up all the goodies. There wasn’t much left for us, but what we ate was pretty good.

We were headed to a campground not far from Houston called Shady Rest RV Park. We fuelled up in Houston and made for the campground. While it was mostly gravel parking pads for RVs and trailers with some grass between spots there was a really nice tent-only area that the owners sent us to. Since we were almost the only ones, we got the pick of the spots. This place had something I’ve not seen at another campground – a shelter over the tent site!

We made our camping classic dinner of chickpea masala and couscous wrapped in a tortilla shell.

The only negative thing I can say about the Shady Rest is that the damn CN train engineers insisted on hooting the air horns all night. Louise didn’t hear them because she wears earplugs.